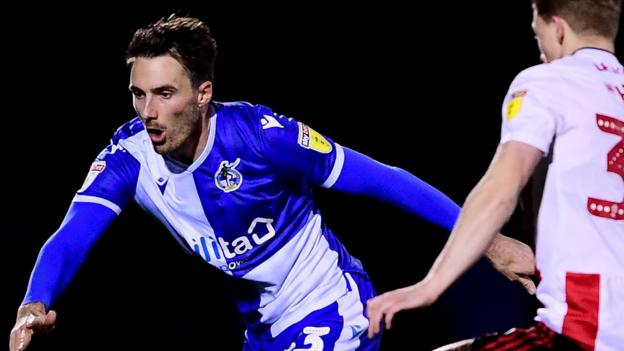 Players in Leagues One and Two are wary of returning to football, Bristol Rovers midfielder Alex Rodman says.

The English Football League has been suspended since mid-March because of coronavirus and clubs have yet to return to training.

“I think a lot of players, in League One and League Two especially, are very worried as well.”

Football will not return before 1 June at the earliest despite the government announcing some limited relaxation of lockdown measures earlier this week.

But it is still unclear what protocols will have to be in place for football to be safely played behind closed doors.

“I know there was a date of 16 May where we were not allowed to come back to training before,” 33-year-old Rodman told BBC Radio 5 Live.

“The statement from Boris Johnson probably dictates that’s going to move further back. The situation in Wales is different with Cardiff, Swansea and Newport over there.

“In my eyes probably, with the revelations of the last day or two, I don’t see us coming back any time soon, possibly not at all. That’s the biggest thing we’re waiting for now.”

The Premier League has agreed a £4m deal with a Hong Kong-based company to provide coronavirus tests for players.

But it is unclear who would fund a similar arrangement for the EFL, and Rodman says football should not take tests away from people who need them more.

“There’s a lot more deserving candidates for the testing and safety measures for us to consider going back into football at the moment,” he said.

“We’ve probably got to look at Germany and see how their situation unfolds,” he continued.

“The whole season goes into jeopardy then and the competition can’t be fulfilled. I just think it’s nigh on impossible to do that.”

‘I want to win the league’

While Rodman’s Rovers are mid-table in League One, Swindon Town are second in League Two, behind leaders Crewe only on goal difference with a game in hand, and their manager, Richie Wellens, says he wants the season to be concluded one way or another.

“You definitely can’t null and void it because we’ve invested a lot of time, effort, money, to get our club where it is, so is it points per game? We don’t know.”

But Wellens says not being able to celebrate a title or promotion in front of his side’s supporters will hurt everyone at the club – with any games likely to be played behind closed doors for the foreseeable future because of social distancing rules.

“A big reason why we’re so difficult to beat at home is because when teams are doing their preparation they say ‘OK, they’re a good footballing team, they cause you problems and the crowd are with them’,” he added.

“It’s a difficult place to come to try to get a result, so our crowd are a really big part of what we’ve done this season.

“I want to win the league, but I want to do it with my supporters, if we win the league and we celebrate and there’s a few ball boys there, a few paramedics and some directors, we won’t take any satisfaction in that.

“Obviously we’ll be pleased to win the league, but we want to share it with our supporters.”

Back to: Home – Bristol News

Appeal after bird of prey shot in Forest of Dean
Coronavirus: 'Save water' to meet lockdown demand
GWR boss who scammed thousands in false claims is spared jail
Edward Colston statue pulled down by Black Lives Matters protestors in Bristol

10 tips to look after your mental health during coronavirus lockdown