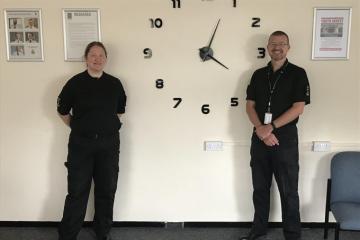 FOLLOWING the departure of Inspector Sarah Blake at the start of the month, Stroud and Dursley now have a new police inspector.

Inspector Paul Cruise will now be heading up the neighbourhood team.

Insp Cruise came to Gloucestershire Constabulary in 2007, having worked as a police officer in the Metropolitan Police Service and Cleveland Police.

“The majority of my service has been spent working in front line response policing,” he said.

“In recent years I have worked within the Community Harm Reduction Team, focusing on a more restorative approach to policing.

“This included working alongside initiatives such as the Aston Project, Children First and Schoolbeat.

“Having recently moved into my role of the Neighbourhood Policing Team Inspector for Stroud and Dursley, I am extremely excited to be given the opportunity to work with a fantastic team of officers and staff who are intent on providing the highest level of service to all who live, work and visit here.

“I very much look forward to forging strong working relationships with the communities, businesses and our partner agencies in the area.”

She said: “I am very privileged to have worked with such a fantastic team of people who give many hours of their own time to support the constabulary.

“I look forward to continuing working with the Stroud and Dursley team in my new role.”

Portishead lido trying to make business 'financially viable'
First look inside swanky new Clifton cocktail bar
Man charged after suspected drugs found following A419 crash near Cricklade
EXIST: Latest traffic and weather notices as snow set to go to Gloucestershire
Share on TwitterShare on FacebookShare on PinterestShare on LinkedInShare on RedditShare on WhatsAppShare on PocketShare on TelegramShare on Email

Outdoor dining ‘pods’ give Cotswold diners a room with a view

Two freed after car crashes into hedge on A40 near Northleach

Stabbing in Bristol: Boy out of hospital, two youths arrested