Among the major car makers, Ford sales were down 18.5% in March year-on-year.

Vauxhall bucked the trend with 2% growth, while Volkswagen sales rose 1%.

“The new car market declined -3.4% in March reflecting continued political uncertainty. Whilst there is demand for new cars, consumer decisions are being delayed due to Brexit.

We call on the government to produce a deal with the EU that protects motor retailing, a crucial industry for the UK economy.

Industry body the SMMT blames Brexit uncertainty, and ongoing concerns about diesel cars, for the decline. 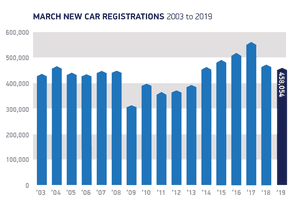 Drivers continued to shun diesel-powered vehicles – registrations slumped by 21.4%, while petrol sales rose by 5.1%. Electric and hybrid sales rose by 7.6%

“March is a key barometer for the new car market, so this fall is of clear concern. While manufacturers continue to invest in exciting models and cutting-edge tech, for the UK to reap the full benefits of these advances, we need a strong market that encourages the adoption of new technology.

That means supportive policies, not least on vehicle taxation and incentives, to give buyers the confidence to invest in the new car that best meets their driving needs. Above all, we urgently need an end to the political and economic uncertainty by removing permanently the threat of a ‘no deal’ Brexit and agreeing a future relationship that avoids any additional friction that would increase costs and hence prices.”

The Federal Statistical Office reported Thursday industrial orders dropped 4.2% in February, following a revised 2.1% drop in January from December, according to seasonally and calendar adjusted figures.

ING economist Carsten Brzeski said it had seemed that a trend of decreasing orders had ended at the end of 2018, but the “sharp drop in new orders clearly undermines latest tentative signs of a rebound in global activity in the first quarter.”

Domestic orders dropped 1.6% in February, while foreign orders fell 6%. Of the foreign orders, those from inside the eurozone dropped 2.9% and those outside dropped 7.9%.

Germany’s economy ministry has warned that:

“In the coming months, a subdued industrial economy is to be expected, especially because of a lack of foreign demand.”

European markets are trading lower due to the dreadful economic reading out of Germany. The factory order data plunged during the month of February, it fell 4.2 percent m/m while the estimates were for a 0.3 percent increase.

The European Central bank really needs to wake up, it needs to start paying attention to these feeble economic reading.

He blames “Brexit woes and continued global uncertainties” for the 7.9% tumble in orders from non-eurozone companies in February.

In a note titled “no green shoots”, he says:

While it looked as if the trend of order book deflation in the German industry had come to a halt at the end of last year, it now looks as if the halt was simply a mere pause before the next landslide. Remember that new orders dropped by more than 1% month-on-month on average every single month in the first half of 2018 and then increased by a monthly average of 0.2% between August 2018 and January 2019.

Today’s sharp drop in new orders clearly undermines latest tentative signs of a rebound in global activity in the first quarter of 2019. Maybe February was simply too early to feel the rebound. This is the positive reading. The negative reading is that the German industry should prepare for more bad news.

Economist Fred Ducrozet of Swiss bank Pictet has dug into the data, to show how German factories have suffered from global trade conflicts:

Yes, German new orders and IP series are volatile. Yes, the manufacturing sector has been hit by a series of shocks (cars; Rhine; you name it). But the main reason is that Germany remains over-exposed to global trade – see the trend in ‘core orders’. pic.twitter.com/mF4DJmyDBd

This is also evident in the boom-burst pattern in foreign orders, back to their 2016 levels. Domestic demand has gone through a soft patch, but nothing dramatic. pic.twitter.com/h8mph5lB08

The sharp fall in German factory orders has alarmed the City.

Analyst Nour E. Al-Hammoury fears that Germany’s economy could be dropping into recession: 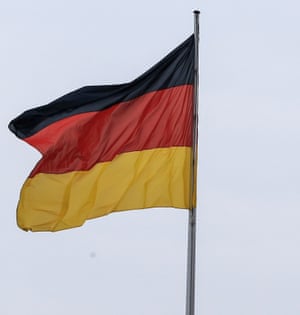 Good morning, and welcome to our rolling coverage of the world economy, the financial markets, the eurozone and business.

A shock fall in German industrial orders has reinforced concerns that Europe’s largest economy is struggling, in the face of global trade tensions and the Brexit crisis.

That’s the worst monthly fall in two years, dashing hopes of a small rebound, and follows a 2.1% decline in January.

On an annual basis, factory orders were a painful 8.4% lower, suggesting that Germany’s industrial heartland has weakened over the last year.

The Ministry says orders from beyond the eurozone were particularly poor:

Domestic orders decreased by 1.6% and foreign orders fell by 6.0% in February 2019 on the previous month.

Orders for capital goods (heavy duty machinery) slumped by 6% month-on-month, a sign that companies around the world were reluctant to sign off expensive projects in the current climate. Consumer goods orders fell by 3.5%.

Germany is already teetering on the brink of recession, having not posted any economic growth in the second half of 2018.

Economists had hoped that its manufacturing sector had turned the corner, but such a sharp decline in new orders suggests that production could be weak for the next couple of months.

Ouch! More disappointing data from the German economy today. Factory orders fell 4.2% m/m in Feb., with expectations for a 0.3% increase

This bad news comes as US and Chinese officials keep negotiating a possible trade war truce in Washington. President Donald Trump is expected to meet with Chinese Vice Premier Liu He later today.

Investors and industrialists alike will be hoping for a breakthrough that lifts the tariffs imposed on exports last year.

The International Monetary Fund will highlight more problems in the world economy later today, when it releases its Global Financial Stability report.

DAVID DREW: Queen's Speech was a 'cynical stunt'
Updates: Major emergency service response after reports someone fell through the roof of a garage
Should Stratford Park Leisure Centre be more like The Pulse?
Typically fabulous Lady Boys of Bangkok are returning to Bristol

Should the government determine what counts as quality journalism?