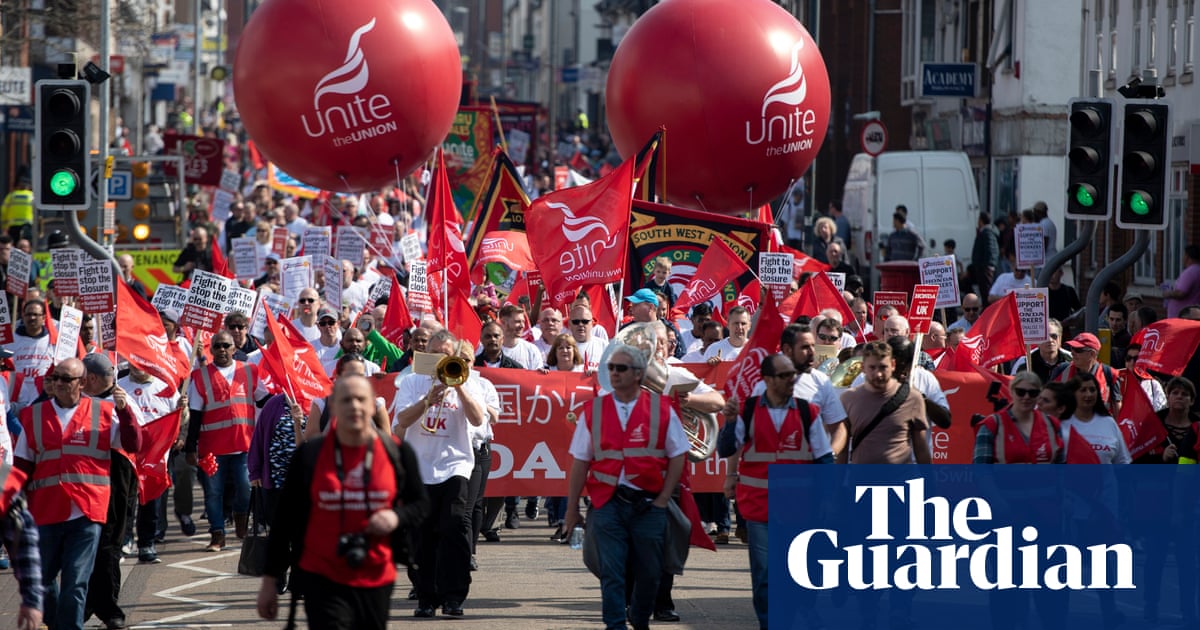 Hundreds of workers have marched through Swindon in an attempt to save their jobs by convincing Honda to reverse its decision to close a car manufacturing plant in the town.

The protesters, many of whom were joined by their families, were demonstrating against Honda’s plan to close the car plant in 2021, which will cost 3,500 workers their jobs.

Union leaders say the Japanese car manufacturer’s decision will devastate the community and affect thousands more jobs in the supply chain which rely on the factory.

The plant is the manufacturer’s only factory in the EU and produces 150,000 vehicles a year. Its closure is a major blow to the British car industry and has been opposed by the business secretary, Greg Clark, who has pledged to lobby to reverse Honda’s decision.

Honda has been building engines in Swindon since 1989.

One 25-year veteran of the plant said workers felt “betrayed” and he would fight to keep the factory open.

Unite’s assistant general secretary, Steve Turner, who addressed the rally on Saturday and read a supportive message from the minister to the crowds, said the plant closure spelled disaster for the town.

He said: “If you lose a big plant like this in the heart of Swindon that’s a death knell for manufacturing.

“There are 10,000 manufacturing jobs in Swindon, these are official figures, and 3,500 are directly employed in the Honda factory itself. And then there are many thousands more, of course, in the location that are supplying into the plant,” he said.

Turner said many workers had been joined on the march by their children. “It’s a fight not just for the people who are employed today … this is about giving a bit of hope and opportunity for the next generation to come along who want a decent job, an apprenticeship, some stability in their lives.

“It’s a very diverse work group. Some are coming to the end of their working lives, but many are just starting families or buying homes and trying to settle properly and establish themselves in Swindon.”

The closure would devastate workers and their families as well as the community, he said. “These are good jobs, unionised jobs, with a decent rate of pay and pension entitlements and everything that goes with that. If you take that out of the heart of the community all that’s left is service industry jobs and warehousing and minimum wage.”

Paddy Brennan, who leads workers at the factory as Unite’s convener, said: “It is a betrayal. We earn our money in that factory. The money is good but it’s not given. It’s hard work.

“The initial reaction was one of anger because the whole world knew before the workforce knew … They hadn’t informed not one factory worker.”

Brennan, who has been with the firm for 25 years and was a shopfloor worker on the production line before taking up the union role a year ago, said he would not stop fighting to keep the plant open.

The father of five said there were people of all ages at the march through the town from Swindon’s football ground. “We had children, parents of some of the workers probably in their 60s and 70s, we had disabled people, people who had had operations. One guy in particular turned up in crutches to support our campaign,” he said.

In February, Honda announced its decision to close the Swindon plant in 2021 as part of restructuring plans.

Katsushi Inoue, the president of Honda Motor Europe, said last month: “In light of the unprecedented changes that are affecting our industry, it is vital that we accelerate our electrification strategy and restructure our global operations accordingly.

“As a result, we have had to take this difficult decision to consult our workforce on how we might prepare our manufacturing network for the future. This has not been taken lightly and we deeply regret how unsettling today’s announcement will be for our people.”

Man, 51, dies after being hit by train near Cam and Dursley
Train tickets: Why getting from Cardiff to Bristol is so expensive
The best pictures from The Grand Iftar in Easton, Bristol, as thousands enjoy huge celebration
Care service for vulnerable children "falling short in critical areas"

‘It has a real buzz’: how the new high street is bucking the trend